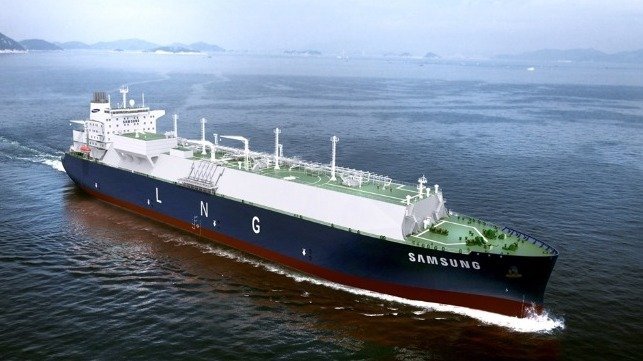 Bloom Energy and Samsung Heavy Industries (SHI), a part of Samsung Group, announced a collaboration to design and develop ships powered by Bloom Energy’s solid oxide fuel cell technology. Bloom Energy is the world’s leading provider of stationary fuel cells and SHI is one of the world’s largest shipbuilding companies.

The collaboration aims to develop designs for an LNG carrier powered by fuel cells following the companies’ previous work with fuel cell-powered tankers.

This current effort will seek to develop designs for an LNG carrier powered by fuel cells following the companies’ previous work with fuel cell-powered tankers. In September 2019, Samsung became the first shipyard in the world to receive an approval in principle by DNV GL for a fuel cell-powered Aframax crude oil tanker. The tanker was also developed in cooperation with Bloom Energy.

The two companies have already taken an important first step towards commercializing the maritime use of fuel cells for propulsion and auxiliary power. At a ceremony in the SHI Geoje shipyard, Samsung Heavy Industries announced they have received Approval in Principle from DNV GL, the internationally accredited marine shipping registrar and classification society, in collaboration with Bloom Energy to proceed with a fuel cell-powered ship design for Aframax crude oil tankers (COTs).

“As regulations to reduce GHG emissions take effect step-by-step, the introduction of fuel cells to vessels is inevitable. This approval, and being the first shipbuilder to secure this marine fuel cell technology, illustrates that Samsung Heavy is highly likely to lead the market,” said Kyunghee Kim, vice president of SHI Outfitting Engineering Team.

“It is a meaningful GHG emissions reduction measure to apply Bloom Energy’s fuel cell system to SHI’s new Aframax design. SHI’s new Aframax design is equipped with a new generating system in combination of the conventional, generator engines, and the new fuel cell technology, both fueled with LNG,” said Hwa Lyong Lee, vice president of Regional Business Development, Maritime at DNV GL. “This innovative design is one of the ways to improve GHG emissions, to further make LNG a solid and long-term solution.”

Today, 80 percent of the world’s shipping fleet runs on heavy fuel oil, or bunker fuel. The combustion of this fuel to provide propulsion and auxiliary power to ships causes the marine transport industry to produce between 2% and 3% of global carbon emissions. If the global marine shipping industry was a country, it would be the sixth largest producer of greenhouse gas (GHG) emissions in the world.

According to the companies, their efforts to develop clean power will help to achieve the International Maritime Organization’s mandate to meet emissions reduction targets by 2050. Because the fuel cells create electricity through an electrochemical reaction, without combusting the fuel, these ships would be able to improve air quality with a reduction of particulate emissions, including NOx and SOx, by more than 99 percent, and shrink carbon emissions.

“The marine shipping industry has the ability to make a substantial impact on emissions and air quality at ports and across our planet,” said KR Sridhar, founder, chairman and CEO of Bloom Energy. “We see a collaboration with one of the world’s largest shipbuilders, SHI, as a moment to make measurable strides in reducing emissions and extending our mission for clean, reliable energy to the seas.”

Samsung will take an active role in all stages of the project from the early studies to project completion, while Bloom Energy is creating a dedicated, cross-functional team of engineers to adapt Bloom Energy’s Servers to the unique requirements of the marine environment.Also, the two partners aspire to develop clean power will help to achieve the International Maritime Organization’s mandate to meet Emissions reduction targets by 2050.